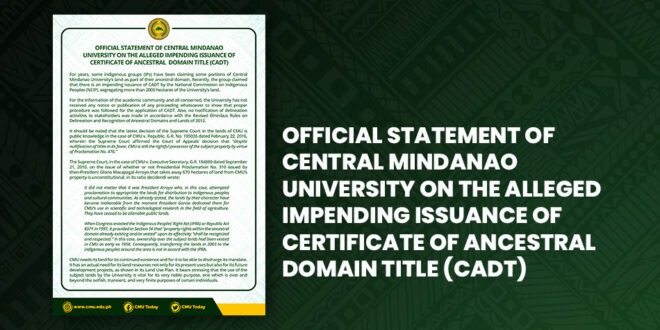 For years, some indigenous groups (IPs) have been claiming some portions of Central Mindanao University’s land as part of their ancestral domain. Recently, the group claimed that there is an impending issuance of CADT by the National Commission on Indigenous Peoples (NCIP), segregating more than 2000 hectares of the University’s land.

For the information of the academic community and all concerned, the University has not received any notice or publication of any proceeding whatsoever to show that proper procedure was followed for the application of CADT. Also, no notification of delineation activities to stakeholders was made in accordance with the Revised Omnibus Rules on Delineation and Recognition of Ancestral Domains and Lands of 2012.

CMU needs its land for its continued existence and for it to be able to discharge its mandate. It has an actual need for its land resources not only for its present uses but also for its future development projects, as shown in its Land Use Plan. It bears stressing that the use of the subject lands by the University is vital for its very noble purpose, one which is over and beyond the selfish, transient, and very finite purposes of certain individuals.