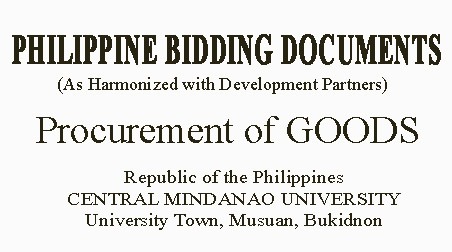 A complete set of Bidding Documents may be purchased by interested Bidders on June 6, 25, 2012 from the address below and upon payment of a nonrefundable fee for the Bidding Documents in the amount of Twelve Thousand Seven Pesos Only (Php12,007.00). Pre-Bidding shall be on June 13, 2012 @ 2:00 pm.

It may also be downloaded free of charge from the website of the Philippine Government Electronic Procurement System (PhilGEPS) and the website of the Procuring Entity, provided that Bidders shall pay the nonrefundable fee for the Bidding Documents not later than the submission of their bids.

Bid opening shall be on June 25, 2012,  2:00 p.m. at BAC Office, Central Mindanao University, Musuan, Bukidnon.  Bids will be opened in the presence of the Bidders’ representatives who choose to attend at the address below. Late bids shall not be accepted.  Award will be on per item basis.