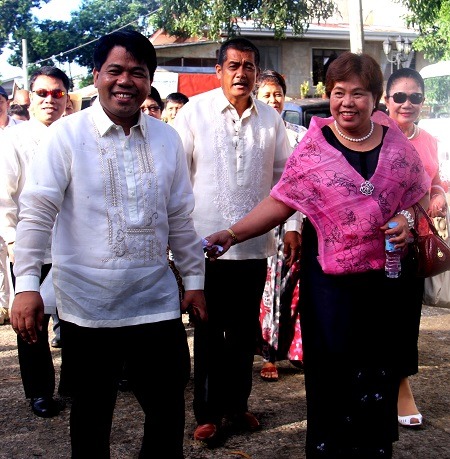 The celebration aimed not only to commemorate and to acknowledge the valiant efforts of our national heroes who fought for freedom but also to exert a concerted effort in fighting for unity towards achieving collective growth of the nation.

Dr. Maria Luisa R. Soliven led the CMU delegation composed of the VP for Academic Affairs – Dr. Anthony M. Penaso,  VP for Administration- Dr. Ricardo G. Villar, the college deans, directors, heads of units, other representatives of the different colleges and units,  NSTP Coordinators and the Bidlisiw Socio-Cultural Troupe. Mr. Gideon Cabahug, Jr. of the University Extension Office gave the interpretation and salutation to the Philippine flag and Prof. Romulo Guazon, Jr. of the College of Arts and Sciences,  presented the review of the Philippine History and Independence Movement. The Bidlisiw Socio-Cultural Troupe performed a folkdance and rendered a kundiman song  that wowed the audience. Clockwise. The university delegation led by the University President participates in the civic-military parade, the CMU Bidlisiw Socio-Cultural Troupe in their exemplary performance of Sayaw sa Bangko, and Prof. Romulo Guazon, Jr. relates the Philippine History and Independence Movement.

Undersecretary Jerry E. Pacturan of the Department of Agrarian Reform was the keynote speaker. He stressed that our nation’s march for independence goes on and is a never-ending journey, just like an art that is being refined for perfection. He added that the Filipino people should never stop to work hand in hand as we all travel the “tuwid na daan” and to continuously pitch in for the inclusive growth of the country we are all hoping for.

Hon. Jose Obedencio, the Municipal Vice-Mayor formally closed the program and graciously thanked everyone who helped and participated in the celebration.  This was followed by the singing of Pilipinas Kong Mahal and the Maramag Municipal Hymn. Finally, every agency which participated released balloons to symbolically lift up the goals of the 115th Philippine Independence Celebration (KDZambas/UPIO).