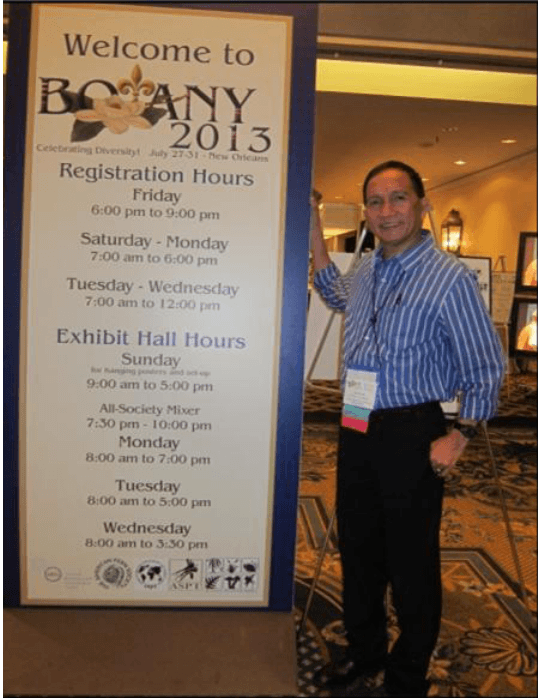 Dr. Victor B. Amoroso, University Professor and Scientist, presented a paper entitled  “Utilization of Indigenous Edible Mindanao Ferns as an Alternative Food Source” at  the Botanical Society of America Conference on 27-31 July 2013 at Hilton Riverside, New Orleans, USA. This conference aimed to disseminate and share information from all fields of botanical sciences and establish collaboration with experts worldwide.

Dr. Amoroso was the only participant from the Philippines and was one of the 16 speakers. The conference brought together 1, 100 scientists from 31 countries who also belong to several societies having a wide range of botanical disciplines. Some participants were very interested on his topic considering that it was both basic and applied research. One inquiry was regarding the carcinogenic effect of Pteridium  aquilinum or bracken fern which is widespread in the US and the only species of fern reported to be poisonous.

Aside from presenting a paper, Dr. Amoroso was also keen on establishing collaborations with the California Academy of Science (CAS). He discussed with Dr. Darin Pennys a possible collaborative research study on three mountain ecosystems in Mindanao. Consequently, a Memorandum of Agreement between CMU and CAS is now being drafted.  Dr. Amoroso also had fruitful discussions with Dr. David Barrington and Dr. Michael Sundue of the University of Vermont in Burlington, USA regarding possible exchange of herbarium specimens, literature, and the possibility of sending students for advanced degrees.  He also contacted the person in- charge of the registration of herbaria so that the CMU Herbarium would be included in the Index Herbarium.

Dr. Amoroso’s trip to the US also allowed him to meet previous collaborators. His other great opportunity was to meet the internationally known pteridologists Robbin Moran, Kathleen Pryer, Harold Schneider and many others. Dr. Amoroso’s attendance in the conference was funded by the CHED and CMU (FCT).