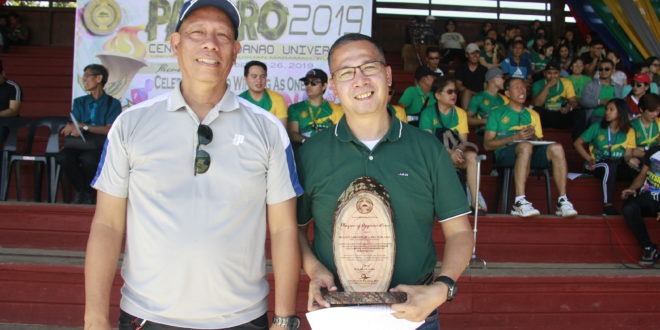 “We all recognized that engaging in sports is one way to keep the mind and the body in perfect shape. As a dictum would say, which is written at the back of your PE Uniforms, ‘Mens sana in corpore sano’ [which means] ‘Sound mind and sound body.’ For me, if I were to change it, this should be, ‘A sound mind in a sound body.’

This was articulated by Dr. Leo G. Labrador, the Resource Speaker and the Dean of the College of Arts and Sciences, in his speech on Mental Health Awareness during the opening program of CMU Palaro 2019, October 22.

Dr. Labrador, who is a Clinical Psychologist, delivered his speech entitled, “Suicide and Mental Health: You are Not Alone,” in connection with the Mental Health Awareness Day celebration.

World Mental Health Day is observed on October 10 every year which intends to help raise awareness of mental health issues around the world and seek support and empowerment to take action and lasting change.

The Republic Act No. 11036, otherwise known as the Mental Health Act was signed into law on June 20, 2018. The law would safeguard the rights and welfare of individuals with mental health needs.

“It’s noteworthy that the Opening Program of the CMU Palaro 2019, for the first time, inserted such activity on Mental Health Awareness,” Dr. Labrador said.

According to him, the activity is unique because it is being incorporated into this years’ Palaro, which is also designed to promote physical and psychological well-being through sports. “…This is a good opportunity for the university to be oriented that mental health is something that we have to take care of,” he supplemented.

Dr. Labrador enumerated some of the very important facts related to Mental Health. According to him, there is around twenty percent of the world’s children and adolescents have mental disorders or problems. Stigma and discrimination against patients and families prevent people from seeking mental health care.

Moreover, he said that there is a huge inequity in the distribution of skilled human resources for mental health globally. And that there are five key barriers to increasing mental health services availability and about 800,000 people commit suicide every year.

“It’s getting younger and younger, so it is really a cause for alarm,” Dr. Labrador mentioned.

He highlighted that the role of mental health awareness is to strengthen the family relationship because according to research, reasons, why adolescents or youth commits suicide, is ‘disconnectedness’ in terms of family relationship.

“Bakit? Ang youth natin ngayon very oriented with the social media, parang, kahit na magkasama sila, they don’t interact with each other like physical interaction because they are very busy with their cellphones or gadgets,” he said.

He emphasized that modern technology affects why there is a rise in suicide giving instant gratification to people, which takes away the value of patience or the value of waiting. So, they get easily frustrated, and when they get frustrated they become depressed, and when they’re depressed, thoughts will start entering into their minds like they are worthless, and they cannot do anything about the situation, which eventually led to suicide if without intervention.

Furthermore, Dr. Labrador cited notable habits or interventions on how to prevent suicide, namely: Talk about suicide and give a suicidal person the opportunity to express his or her feelings, be a good listener, respond quickly in a crisis, and connect to them with support.

Mental health is really important not only to youth but also to employees, and it is the university’s advocacy to promote and protect it, especially nowadays that there are a lot of situations where employees are subjected to stresses “…If we are not mentally healthy, eventually, it will affect our relationship with other colleagues, our work, our performance, and eventually everything will be affected,” he noted.

Dr. Labrador ended his talk with these parting words: “We need everyone’s help, which is why we hope to receive contributions not only from the community but also from all of you,” he said. (Hiedy S. Cañete)