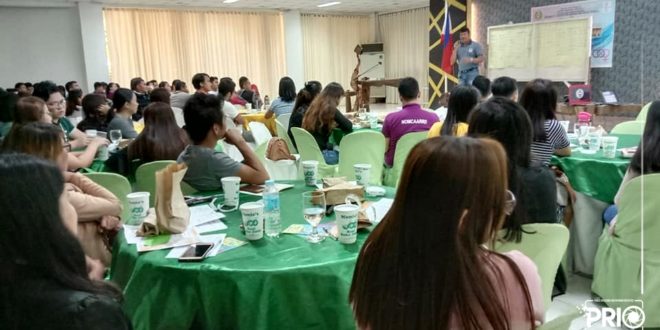 The University Center for Gender and Development (UCGAD) trained 75 new employees coming from various units in the university about gender sensitivity as part of the mainstreaming activity of GAD, held at the Farmers Training Center, on November 26.

The training aims to increase understanding of gender as a social construct and the roles of social institutions in reinforcing and perpetuating gender inequalities. It also aims to recognize personal gender biases by becoming more aware of gender myths and facts.

In her opening remarks, Dr. Athena Jan I. Derayunan, HRMO Director, articulated the university’s commitment towards achieving the UCGAD’s mandates: “It is more than a policy but a commitment which our university has engaged in through developing programs that are aligned with social justice, solidarity, and most importantly equitable relations between men and women in decision-making and in developing a better society.”

The UCGAD technical working group also conducted a pre-test to assess the level of gender sensitivity awareness of the participants and later a post-test to evaluate the participants’ absorption of the topics.

One of the participants, Mr. Novie T. Castro of the Research Office, expressed his appreciation, saying that GST widens his perception about sex and gender, especially in his relationship with his family, workplace, and society.

“As a proud member of the LGBTQ+, such discrimination has always been there around us, and I hope that this training could also help those people with less knowledge about gender sensitivity to better understand us,” he added.

Furthermore, Dr. Marciana R. Zaman, UCGAD chief emphasized the importance of GST training to open up communications between the sexes and to bring mutual understanding and respect of each other’s roles. She also elaborated on the goal of the center which is to mainstream GAD and to develop a gender- sensitive environment in the university.

2019-12-06
CMU PRIO
Share !
Previous: 1,600 Graduating Students undergo Career Guidance Seminar-Workshop
Next: LOOK: College of Business Management (CBM) is having a Demo Day and Pitching Competition at the CBM Grounds. Everyone is welcome to visit and participate.