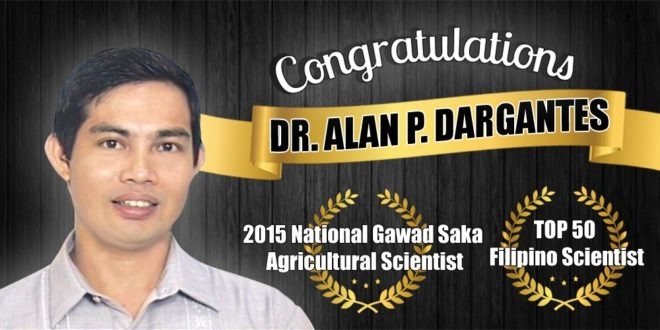 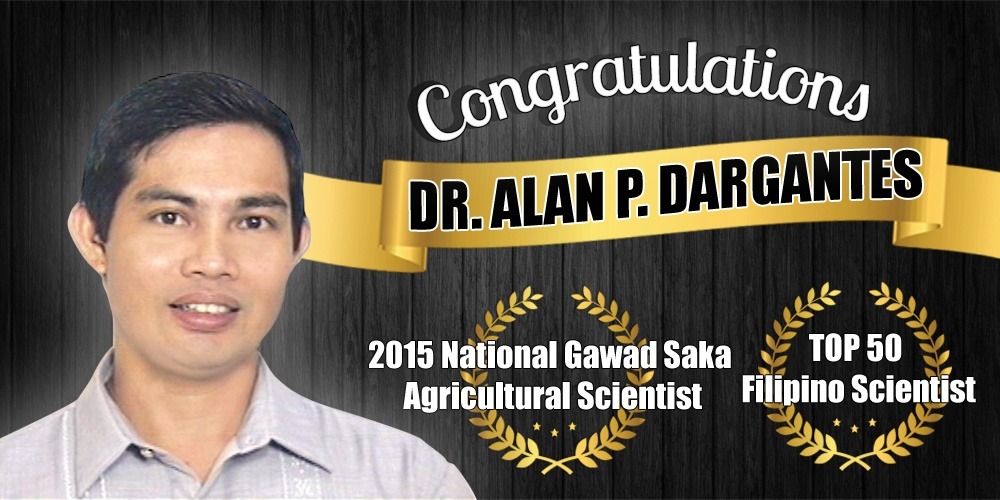 Dr. Alan P. Dargantes, Dean of the  College of Veterinary  Medicine (CVM), is the recipient of the 2015 National Gawad Saka Most Outstanding Agricultural Scientist Award besting    other  nominees from other regions nationwide. The awarding ceremony will be on December 9, 2015 at the Philippine International Convention Center (PICC), Pasay City, Philippines.

Dr. Dargantes, also the recipient of the 2015 Region X  Gawad Saka Most Outstanding Agricultural Scientist Award, is a Doctor of Veterinary Medicine graduate  (1993; cum laude) of Central Mindanao University. He  was awarded as one of the 30 national finalists of the Ten Outstanding Students of the Philippines (TOSP) and a 3rd placer in the National Veterinarian Licensure Examination in 1994. He is considered as the Surra (a highly important disease of vertebrate animals caused by Trypanosoma evansi) Expert in Mindanao and had received various awards in the field of veterinary medicine.  His extensive research on the economic impact, diagnosis, epidemiology, pathology, vectors, control and treatment of surra and the huge contribution of his work on agriculture not only locally but internationally made him bagged the award. Dr. Dargantes had published more than 15 research papers in international journals and is currently working on surra and other transboundary and zoonotic diseases in partnership with local and international scientists particularly from France, Australia, Thailand, Vietnam, Indonesia, Malaysia, Laos and Cambodia.

“I am very grateful to my family, CMU, DA Regions X, XI and XIII, DA-NOMIARC, my Vet Med and OSA families, research partners, research students and all individuals who had supported me in this competition and all my research endeavors. I am very happy because I have been given the opportunity  to help not only the local farmers but also the animal owners and veterinarians from other countries where surra is present. As part of the BioZoonoSEA platform and the GREASE Research Network (http://www.grease-network.org/), a regional network that supports research activities for a better Management of Emerging Epidemic Risks in Southeast Asia, we are not only training the veterinarians internationally, but we also include farmers. I just wanted to help and to be part of a solution through research.  Awards are just added colors and bonuses, but what is most important is we are able to contribute to the development of our country and globally”, Dr. Dargantes expressed in an interview.

The National Gawad Saka Search for outstanding achievers in agriculture and fisheries is an annual project headed by the Department of Agriculture through the Bureau of Agricultural Research as the national coordinator and in cooperation with the Regional Agriculture and Fishery Council and Local Government Units which started during the early 1960’s. With the Gawad Saka, exceptional individuals and groups are awarded and granted citations based on their contribution to agriculture and fishery sectors. Dr. Dargantes is the first national awardee for Agricultural Scientist Category from Region X and CMU, and the first veterinarian to be given the award.

Aside from his recent award, last July 2015 the Cybermetrics Lab named the Top 150 Filipino Scientists based on their performance according to their Google Scholar Citations public profiles and among the scientists and researchers, Dr. Dargantes ranked 50th. According  to the PhilStar report, the list was collected during the third week of May 2015 from the public profiles of researchers working in Philippine institutions.  The researchers were ranked  by H-index (a tool that measures the efficiency and citation bearing of a published research work) and the total number of citations. Dr. Dargantes had 10 publications with H-Index and 243 citations.

Dr. Dargantes took his Master’s degree in Tropical Veterinary Medicine and Doctor of Philosophy degree in Veterinary Epidemiology & Disease Ecology at James Cook University and Murdoch University, Australia, respectively. He practices the veterinary profession  as a professor, researcher, and as an extensionist for more than two decades and is holding a Professor IV rank in the university.