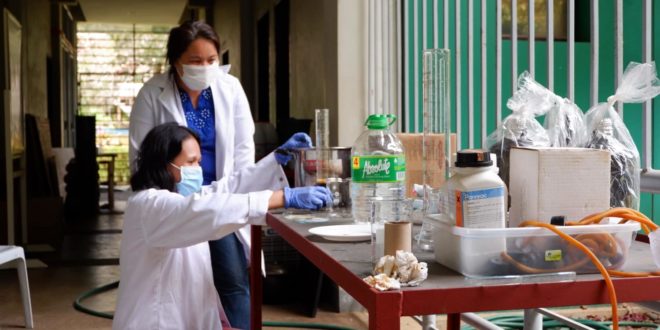 Due to the overwhelming demand for hand sanitizers in the locality, the CMU Ethanol Production Team wanted to go full-scale production of the hand sanitizers to satisfy the need of our frontline institutions like hospitals and checkpoints.

They are now experimenting with using sugarcane molasses to produce ethanol as a raw material in the hopes of producing large scale supply of hand sanitizers for our frontliners amid COVID-19 pandemic.

Molasses will undergo several processes like fermentation and distillation until it can produce by-product ethanol, which is one of the raw materials in producing 80 % alcohol-based hand sanitizers. Molasses are readily available, and Bukidnon Sugar-milling Company (BUSCO)  donated two drums of molasses in the university.

According to Dr. Joy Jamago, the production of hand sanitizers can be eventually sustained when the team can produce our own pure alcohol. She added that as of April 2, alcohol output of the distillation from fermented molasses is very promising.

While fermentation and distillation efforts are still on-going, the team continues to source out ethyl alcohol within the university to sustain the production of hand sanitizers.

The team is willing to receive donations of raw materials like ethyl alcohol (95%), glycerol, hydrogen peroxide, and distilled water to maximize production. As of April 2, 2020, 113 liters of hand sanitizers were distributed to seven different municipalities in the province. (IADalipe-Neri)