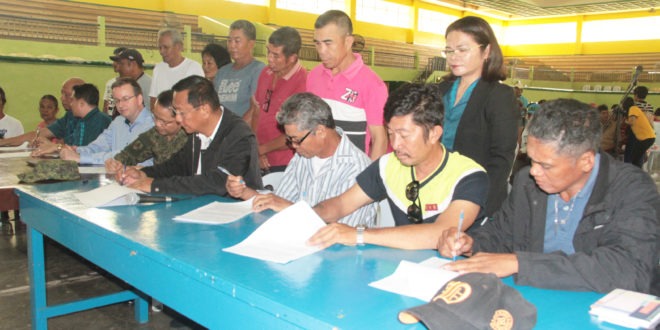 Thus, invigorating the Presidential Proclamation No. 476, otherwise known as, “Reserving for the Mindanao Agricultural College Site Purposes Certain Portions of the Public Domain Situated in the Barrio of Musuan, Municipality of Maramag, Province of Bukidnon, Island of Mindanao.”

Dr. Derije said that he initiated the activity aiming to harmonize and provide a venue to meet halfway, thus, bid for a win-win solution to the long-drawn-out conflict of two parties for the last 33 years.

“I aspired for progress and peace in line with the EO 70 issued by Pres. Duterte and with the solemn advocacy of our Armed Forces of the Philippines, the Provincial Governor, Jose Maria R. Zubiri, Jr. and Hon. Manuel F. Zubiri, Congressman of the 3rd District,” said Dr. Derije in an interview.

“…I know that one of the purposes God send me back here to my homegrown place, my beloved Alma Mater, is to resolve this discord,” he added.

CMU’s role will focus on helping facilitate the implementation of pro-people policies and guidelines following the provisions of the EO 70. The University will also conduct regular Consultation-Dialogue and facilitate partnership with key government sectors and sourcing of assistance to help alleviate the life of informal settlers.

He mentioned particularly that this could not happen before on account of the hard-stand law then, but due to newly issued and existence of the Whole-of-Nation Approach this time, informal settlers must be given their basic human needs and services. Hence, politicians from Bukidnon robustly support it; otherwise, this event will not be realized.

“It is part of my destiny to be the 9th President of CMU because I have a mission here, it is not just to govern CMU but laying groundwork to be instrumental in ensuring that the less fortunate, the less privilege informal settlers and Indigenous People (IPs) to be unified and be encouraged to befriend and support one another,” said Pres. Derije.

Furthermore, the BTL will coordinate with CMU and other agencies for peaceful negotiation of all programs and projects that will be implemented within the area and be an advocate of EO 70 in attaining its objectives. They will voluntarily share every harvest, Four Hundred (400) sacks in 50 kilos each, of the total harvested rice within the area utilized and stop linkages with CAMO’s  affiliated groups and promote partnership with law enforcers, LGUs, and other government agencies.

Mr. Evaresto R. Forten, Chairman of LIMUS, expressed his sincere gratitude for the chance and understanding of the President unto them and for bridging peace and order between CMU and BTL through the said MOA.

Both parties are hopeful that the agreement will strengthen the peace-building initiatives, promote inclusion and empowerment, thus, fulfill the four-fold functions of the university.