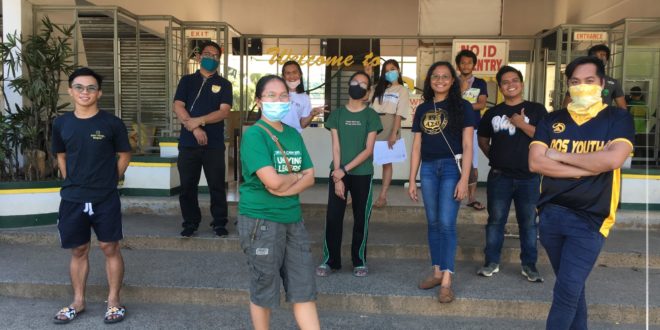 More than 300 students of Central Mindanao University have been stranded since the COVID-19 lockdown in Bukidnon midnight of March 21, 2020.

Through the Office of the Vice President for Academic Affairs (VPAA), profiling of stranded students was done to locate them. The Office of Student Affairs (OSA) and the University Senior Student Council (USSCO) called upon the students to contact them through Facebook live chat.

Having identified the students and their locations, donations, either in cash or in kind, started to pour. All donations were converted to relief packs, which included noodles, eggs, canned goods, soap, rice, and vegetables. As of April 3, more than 500 relief packs were distributed.

Students from General Santos City, Surigao, Zamboanga, Misamis Oriental, and Bohol were among those stranded in the university campus. They are stuck in their boarding houses or dormitories. Before they could leave for home, Enhanced Community Quarantine was already implemented in Bukidnon.

By March 28, however, the OSA headed by Prof. Raul Ebuna arranged and assisted 18 stranded students in going home by coordinating with their respective LGUs. With the assistance of the Provincial Government of Agusan del Norte led by Gov. Dale Corvera, vehicles from CARAGA were deployed to fetch students from the region.

On April 29, the seventh and last distribution of relief goods was done. Yet, the stranded students are still encouraged to coordinate with the OSA through their hotline number, 09177104871.

Since the lockdown in Bukidnon has already been lifted, arrangements for sending home the stranded students are being made. “As of the moment, we are still waiting for the general guidelines to be released before we can finalize how the students can be sent home,” said USSCO president, Arth Vincent Oco.

As students’ safety is a priority of CMU, vehicles that will be used to transport the students will be provided by the university or by the LGUs where they belong. Azuelo, ASJL.

IN PHOTOS: CFES in coordination with the COE and the University Research Office conduct ‘R&D Applications of Geographic Information System (GIS) and Remote Sensing via Zoom meeting and Fb live