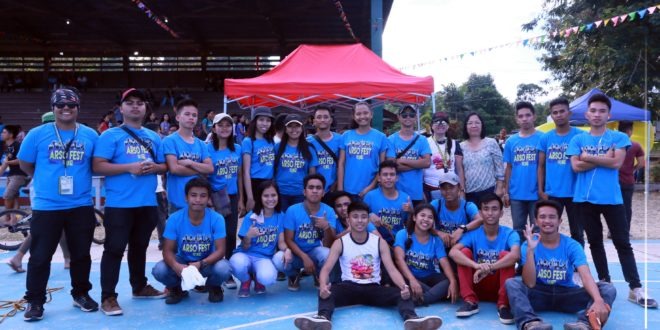 Association of Registered Student Organization highlighted this years’ festival, “Equality and Inclusion,” as support to the sexual orientation, gender identity, and expression in the month- long activity, January 15- February 15.

Different activities were initiated and conducted. It was participated by the 99 registered student organizations in the campus including registered fraternities and sororities.

Mark Anthony S. Pacaldo, ARSO President and a 5th-year Mechanical Engineering student said in an exclusive interview that they were able to come up the theme “Equality and Inclusion,” because of the pressing concern in the surrounding of the uprising LGBT community.

“Some people could not accept them [LGBT] as members of our society… and also those Persons with Disability (PWD) who became the center of bullying,” Mr. Pacaldo pointed out. “We come up with this theme and activity to promote equality to one another, regardless of who we are and whatever we want to be.”

He further expounded that the activity also supports the SOGIE Equality Bill – House Bill Number 4982 also known as the Anti-Discrimination Bill. It is intended to prevent various economic and public accommodation-related acts of discrimination against people based on their sexual orientation, gender identity or expression.

During the culmination, February 15, the activity started with the advocacy run joined by students and some CMU employees. It was then followed by an advocacy talk on SOGIE through Mr. Bryan Lee D. Celeste, a faculty member of the Department of Behavioral Sciences.

Mr. Celeste started his talk by citing the statement from Judith Butler, an American philosopher and gender theorist, ‘There is no gender identity behind the expressions of gender… identity is performatively constituted by the very expressions that are said to be its result.’

He also explained the reason for his talk about SOGIE was because of discrimination, marginalization, and violence against LGBT and intersex persons occur everywhere in the world even in CMU.

“A lot of people may have experienced effects of violence and other forms of discrimination, marginalization, bullying or gender-based violence of LGBT,” Mr. Celeste supplemented.

He vividly described that gender is a very complicated thing. He also indicated and discussed specific topics regarding SOGIE. These comprised: Sexual Orientation, Gender Identity, Gender Expression, Gender-Based Violence, and among others.

In his concluding statement, Mr. Celeste encouraged that everyone should respect diversity, respect equality and celebrate love.

The different Laro ng Lahi games followed right after the advocacy talk at the University Sports Complex. These games were participated by the non-class and class organizations.

Sixteen glamourous candidates dressed up according to their assigned roles. The men wore heels and fancy dresses while women showed up in their elegant tuxedo.

The activity was spearheaded by ARSO officers headed by Mark Anthony S. Pacaldo, ARSO President together with the Office of Student Affairs led by Dr. Leo G. Labrador. (MJLTalisay)

2019-02-25
PRIO WebMaster
Share !
Previous: IN PHOTOS: The Department of Languages and Literature and Department of Social Sciences conducted a Seminar on OBE-English Language Teaching Materials and Islamic Extremism at the CAS AV Hall.
Next: REQUEST FOR QUOTATION OF GIS SOFTWARE