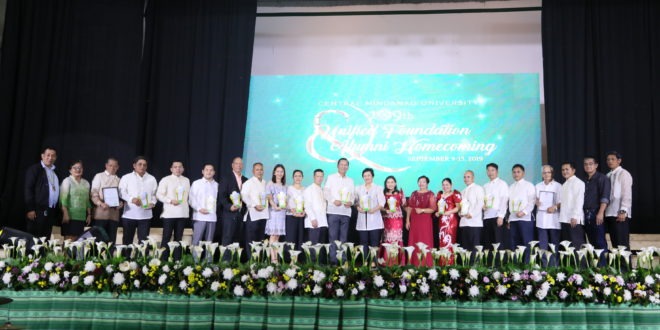 The Presidential Commission for the Urban Poor (PCUP) Commissioner Romeo H. Jandugan, Distinguished Alumni Awardee, reminisced his unforgettable moments in his stay at CMU during his Response Message in the Alumni Awards Program held at the University Convention Center, September 13.

The Alumni Award is a yearly selection of the Outstanding Alumni who exceptionally performed in various fields. The activity was facilitated by the CMU Alumni Association Incorporated (CMUAAI) headed by Hon. Reynaldo G. Juan, CMUAAI President, and Alumni Relations and Linkages Office (ARLO) led by Dr. Jose Escarlos Jr.

Comm. Jandugan reflected in the speech of his mixed emotions that he was chosen as one of the honorees. “As I step in this premises today, I am brought to my younger days. It was already 44 years ago. Recollecting the moments we shared in the village/cottage, we built and improved.”

He recalled that he found home and family at CMU. He also created camaraderie, which helped him to forget his parents’ care temporarily.

He was then appointed by President Rodrigo Roa Duterte as the PCUP Commissioner and sworn on March 11, 2017, at the Malacaňang Palace.

From then on, he became the ally of the poor and forerunner to fight poverty in the country. Comm. Jandugan shared that he received lots of questions about why despite being an undergraduate, “a man with nothing to prove is always chosen to a greater position associated with huge responsibilities.” He proudly responded that he has two reasons, ‘competence and integrity’ that he can boast about himself.

According to him, he wholeheartedly thank the university through the brilliant teachers and instructors for the guidance and wisdom that shaped and nurtured him. He said: “I will not be able to become an Armed Forces of the Philippines Sergeant Major and a father to a more or less 120 thousand strong enlisted personnel and also a Commissioner. Thank you so much!”

In his concluding statement, Comm. Jandugan conveyed his gratitude to Dr. Jesus Antonio G. Derije, the University President, for having a significant occasion in line with the University Anniversary Celebration.

He also mentioned his two classmates, Dr. Rey Boloron and Prof. Vi Leonara Iman Gemoto who inspired and motivated him. His brother, Guitulio Jandugan, one of the very special people in his life and his very supportive family.

The Alumni Awarding was one of the highlights of the week-long celebration of the 109th Unified Foundation and Alumni Homecoming of the university. (Maejoy L. Talisay)