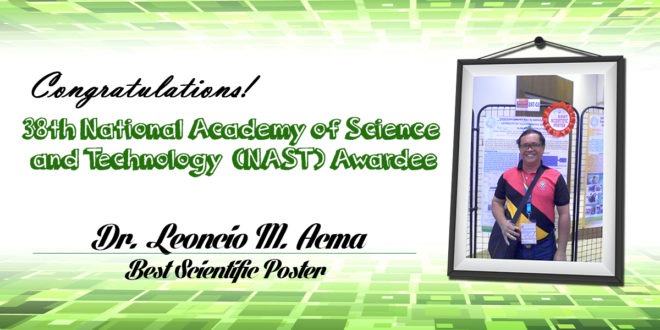 His poster entitled Effect of Coal Fly Ash in Improving the Loading Bearing Capability of High Expansive Soil for Roadway Subbase Construction trounced other eleven poster entries under the Engineering Science and Technology category. His poster illustrated the study on the effect of coal fly ash on the soil’s swelling and shrinkage which was conducted at Barangay Balite and Kibatang, Marilog District, Davao City.

Winning on the said scientific meeting was not as easy as it seemed to be. “I joined the event every year and it took me three years to get this award as best poster,” Engr. Acma disclosed. He considered this as one of his great achievements for the University since it is the first time that CMU marked the trail of the NAST-Annual Scientific Meeting winning lists.  Engr. Acma also said that he thoroughly studied how the previous years’ winning posters were presented and he applied it to his poster entry this year.

Aside from Engr. Acma, there were 29 other CMU faculty members and research assistants who participated and presented posters in various categories.