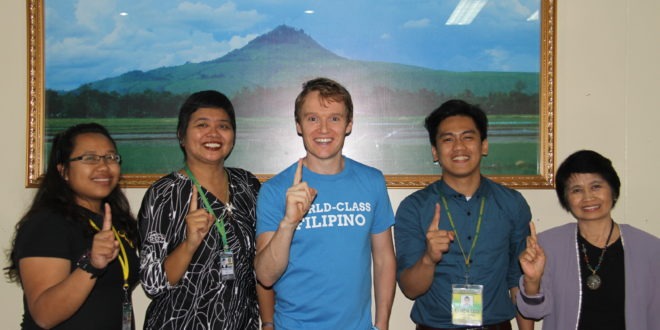 The event dubbed “World-Class Filipino: Why the Philippines will Change the World” was held at 2 p.m. at the Farmer’s Training Center.

Grogan, 33, said he started working in the Philippines in 2014 and decided to stay because he saw something unique in the Filipino culture. He cited its “Bayanihan” and “Walang Iwanan” spirit.

This year, he wrote the book “The Rise of the Pinoy,” where he featured 21 successful Filipinos, among which were the social entrepreneur Tony Meloto of Gawad Kalinga and the author Francis Kong.

He stressed two important key points of life: ‘The secret to living is giving,’ and ‘Belief is the foundation of all success.’

He said that the Filipino is worthy and capable of becoming world-class.

Grogan has a chemical engineering degree from the University College Dublin and has worked for Merck Pharmaceutical for 5 years. He also worked with Comprehensive Community Based Rehabilitation in Tanzania (CCBRT), a non-government organization, before moving to the Philippines.