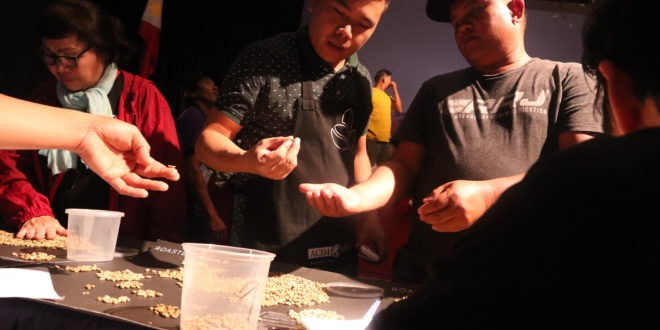 The recent successes of the coffee industry in the province fired up interests and motivation to the coffee farming communities and coffee growers in expanding their knowledge about coffee processing methods to produce best quality coffee.

For two consecutive years, Bukidnon Coffee proved to be the Best coffee for both Arabica and Robusta category during the Philippine Coffee Cupping Competition. In 2017, coffee from Inhandig Tribal Multi-Purpose Cooperative garnered the highest score of 85.75 (Arabica) and the Kape Maramag was awarded 83.42 points (Robusta).

DTI reported that seven coffee producers from Bukidnon were included in the top 20 during the third Philippine Coffee Conference held at Baguio City.

Producing quality coffee here in the province is just within reach since CMU houses the 1st Coffee Laboratory in Region 10.

Through the coffee laboratory, coffee farmers will be trained on coffee production, post-harvest handling, and Q grading which are essential in the production of best quality coffee.

The coffee laboratory is manned by Mr. Andrew Melencion who has international licenses on Q grading for both Arabica and Robusta categories accredited by the Coffee Quality Institute.

Since its launching in November last year, the university coffee laboratory is now gaining popularity from coffee farmers, processors, and those in the coffee industry. It already accommodated hundreds of visitors as far as Marawi and SOCKKSARGEN and trained numbers of coffee farmers from Bukidnon and neighboring provinces.

Mr. Andrew B. Melencion, disclosed that most of the farmers and coffee processors who availed the training were coming from Region 12 which is also considered as top coffee producer in the country.

Last August 24, eight coffee processors from Alamada North Cotabato including some LGU officials and officers from Alamada Multi-Purpose Cooperative were accommodated in the coffee laboratory.

The participants expressed their gratitude to the university and Mr. Melencion for sharing his time and expertise and training them on the processes of coffee cupping and green grading.

Mr. Rudolfo Talle, President of Lebac Coffee Federation, said that it was their first time attending this kind of training and it was a great advantage for them.

“We are integrating high-value crops like coffee [and we] like to intensify on coffee production. We are very fortunate to be able to come here in CMU for this training,” Mr. Talle added.

According to Ms. Fema Agustin, Department of Agriculture-12 regional staff, that Region 12 is considered as a top coffee producer in the country. She added: “Through this training, we can improve the lives of our coffee farmers and ensure the success of the coffee industry by capacitating our farmers and produce quality coffee in our region.”

The Rise of Bukidnon Coffee

Recently, DTI and the Provincial Government of Bukidnon launched the 1st Bukidnon Coffee Festival on August 30-September 1, showcasing the re-birth of the coffee industry in the province.

Some of the highlights of that three-day event were the Coffee Cupping Quality Competition and the Coffee Appreciation Seminar on Coffee Cupping and Green Grading conducted by Mr. Melencion and participated by coffee farmers, LGU officials, and visitors.

Meanwhile, Mr. Melencion urges the coffee farmers from Bukidnon during the celebration of the Coffee Festival to avail the facility in the university and to undergo the training to ensure quality coffee production in their respective farms.

This was supported by Mr. Laurence Pradia, Trade-Industry Development Specialist of DTI, saying that coffee cupping laboratory in CMU and the Q grading process hold critical roles in the development of the coffee industry in the province and the country in general.

“While many target [on] producing higher volume, we should not forget to take care of the quality which will command higher prices of our coffee produce—that is where the coffee lab and Q grading come in,” he added.